Former BBNaija housemate, Ike Onyema has declared that he was a man of his own even before he found fame in the Big Brother house.

Ike posted a photo of himself on his Instagram page where he said he is allergic to being broke which caused a lot of his fans to react.

TRENDING:  I Think About The Ballon d’Or All The Time – Real Madrid Striker Benzema

An Instagram fan identified as @marktrager slid under Ike’s comment section to share his thoughts about how well he thinks Ike has come since he came out of the BBNaija house.

Boy before Big Brother Naija, my account was larger. Fame no be cheap oo 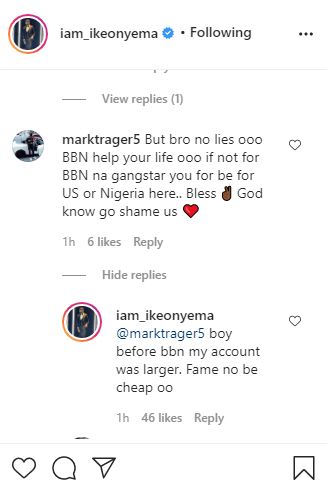 OMG!! Is REMA Truely Depressed & Oppressed or Is He Pulling Kanye West Vibes On Nigerians? -PRAY FOR REMA (See This)

You’re Too Small To Bring Me Down, Mike Ezuronye Slams Kunle Afolayan