Former President Olusegun Obasanjo has warned that the 14 million out-of-school children in Nigeria may become terrorists, kidnappers, and armed robbers if their education is not taken seriously.

Obasanjo’s warning was published the Joint Admission and Matriculation Board (JAMB) bulletin on Monday, revealing that in the next 10 years, these out-of-school children could become perpetrators of heinous crimes and constitute a nuisance in the society.

This is coming months after education minister, Adamu Adamu had also said there were 10 million out-of-primary-school children but that the figure could rise to 14 million when added to those out of junior secondary schools.

Trending:  [A Must See For Ladies] 5 Things You Shouldn’t Never Say To A Man You Love

Obasanjo called on policymakers and key players in the education sector to brace up for challenges as well as ensure that the quality of Nigeria’s education meets the UNESCO Education for All (EFA) standard.

“If we don’t take care of these 14 million out-of-school children in the next 10 years or so, they will be the terrorists, armed robbers, and kidnappers of the future,” 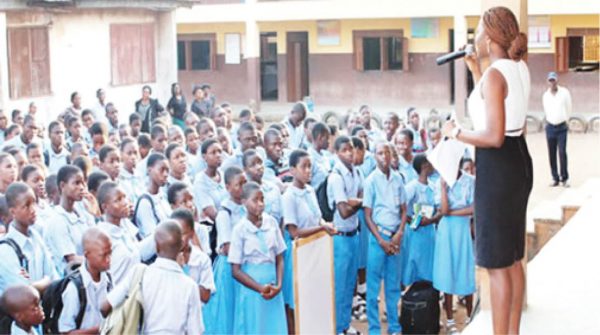 The former president also said that quality education in Nigeria should not always be about the number of universities available.

Trending:  Heartbreaking! Couple Shot Dead By Robbers Before Their Kids In Umuahia Set To Be Buried

“We should be preoccupied with what product is coming out and not about the number or the size. America has varsities with multi-campuses where student populations number in the thousands.

“I used to be a member of the Board of Trustees of Wilberforce University with a total population of 1,500, a small university but one which is making meaningful and impactful contributions.

“We should build on what we have now, improve on them. A population of over 200 million people having 170 or more universities is not too many for me as what matters are content and quality

“And the ability to turn out appropriate products for market and industry. If that is achieved, then universities could be said to be doing what they should be doing and we should hail them for it.”

GBAS GBAOS! El-rufai’s Sons Tackle Atiku After His Son Dropped A Shade For Their Father